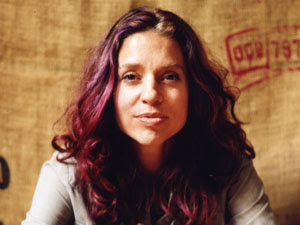 this last saturday i FINALLY got to see ani difranco play...ani concerts and i have a long history. since my junior year of high school i have tried to see her play three times, each unsuccessfully, the last being the summer of my junior year of college which culminated in my breaking my foot the morning before i was going to go.

all of this to say i have waited a long time to see her play...through that time i have seen many concerts some which were incredible and some which left something to be desired...and while she and her band were lovely this show feel into the latter category. first of all the show was at the house of blues (which by the way i refuse to see another show at...unless it's brmc because honestly I would see them anywhere), the show was sold out (ie over sold) and we ended up standing literally in the doorway. secondly, which i admit was my fault, i was running on very little sleep from the evening before and feeling a bit cracked out which kicked my claustrophobia into full gear. then there were the drunk sorority girls in front of us who thought that it would be a lovely idea to dance in a f-king packed show and then get bitchy to everyone who they ran into! needless to say it was not a good way to enter a show. what was good about the show was watching how incredibly generous and aware ani was in regard to sharing/showing off the other three musicians who were playing with her...the renditions of the songs defiantly held a bit of the vibe of her current home new orleans...with jazz and blues undertones. my heart filled with tears of nostalgia and joy when she played "you had time".

yet what was interesting for me as my friend becca and i talked about the show after we left was how much i have gotten so used to the psychedelic rock, alt-country, indie-folk, and whatnot...especially concerts where there is such a profound connection between the audience and the artists...and often becoming a spiritually transcendent experience. the ani show was flat in comparison to these, and in that i realized that i now expect that kind of experience at a concert instead of being awed and blessed by the opportunity for transcendence. i find myself hoping for the black ryder show to come soon or for brmc to play somewhere around town just to get another transcendent music fix.

if you are interested in another's description of the concert here is a pretty well written review http://www.neontommy.com/news/2011/04/ani-difranco-doesnt-get-personal-house-blues
Posted by jessi knippel at 9:07 PM