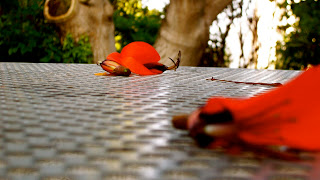 first of all i don't know why but many mystics (sitting in class listening to a lecture on russian mysticism) seem to forget that food was created by God to bring you life...instead they limit what they eat or eat weird things like grass...i don't understand or maybe i'm just not that holy. i remember the first time in college i read catherine of sienna who just plain quit eating, and thinking how stupid it was that she did that and called it God. maybe it's my own issues with eating disorders or the friends i have who have struggled with food as well but it bothers me greatly when one is considered holy in part because they willingly spurn food. i understand mentally the reasons people do this but emotionally it just frustrates the hell out of me.


secondly, somewhat in the vein of mysticism i have been contemplating the various ways and means that people encounter God and the spiritual aspects of life...many of my favorite writers on spirituality and faith are those who take an artistic or mystical approach to faith. i love how in these people there is a wonder to life and the things that sprinkle life, one doesn't need to know how things happen just that they do and our job as it were it to be in right relationship with God, ourselves and others (including all of creation). i love that reverence to the mysterious...it is akin to how one of my ex's, who grew up and became a pastor, talked about his understanding of faith and evolution. he would say all i need to know is that God created the world it doesn't change my faith how God created.  as one who wades through the murky waters of faith and doubts i love people who remind me of what is truly important...trust in God's love and action on behalf of what God created out of love. the whole of all things created were created out of love, out of the most central desire for love and relationship....that is key. that is why i have such a hard time with people who profess christian faith but spew out hatred theirs and God's for creation and the whole of life. yes i understand things are broken, my mother is one of the living reminders of how awfully broken things are, but it was not created to be broken and brokenness is the byproduct of broken relationships between each other, creation and God. which in my view is something that God and ourselves should weep over not celebrate...

i remember several years ago sitting with one of my best friends as she was trying to decide whether or not to go through with her unexpected pregnancy. it was in that moment that i realized i could just as easily be in her shoes facing that choice, but it was rather the thought that came after that effected how i looked a people from then on. in that moment as i sat with her and pondered how i would deal with this struggle (she in the end chose to have my beautiful godson) that i realized i was selfish enough at that time in my life to choose not to have a child. for me that would have been a selfish choice a. because i know so many friends and family who have wanted a child so badly and were unable to have one knowing this how could i not choose to at least bear a child and give them to someone who wanted one and 2. it was my selfishness in having spent my twenties as a nanny raising other people's children because it was easier than stepping out and doing what i loved that would have lead to the choice of an abortion if i had been placed in that situation. after seeing that reality in myself i always catch myself before making judgements on choices other people make...in that moment i realized that we all are broken and screwed up and face horrible choices all the time and do the best we can. this is why i have faith because grace, love and relationships are so very important. in my often outside the norm view of christian faith i see the place where these things can dance together and God is not the sadistic one of my childhood who calls me and then bars my path...God is not the preacher that says come and then demands payment. rather God is the one sitting with me crying over the idea that one should be killed because of who they love, grieving the hatred of people for those who live next door to them because 500 yrs ago or more their great x100 grandparents had a broken relationship.


in the end i find that i seek to understand grace in the midst of all of this craziness and that how i experience faith, love and God will be different from others.

Posted by jessi knippel at 9:20 PM