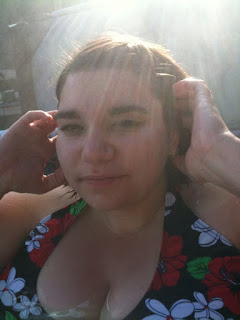 perspective determines how one looks at the world...for me one of the major perspectives that have defined how i look at life is my weight...or rather my battles with my body.

since i was six years old i have been aware of these things 1) my body as that of a female, places me in a odd space in society...both being subjectified and objectification 1-b) some how it was my job to keep that at bay, and sexuality was something that had to be hidden, unspoken, and was embarrassing  2) that my body was not acceptable as is...it was flawed and people would dislike me specifically because of my body. at this point i was a skinny kid.

as i took these explicit and implicit "truths" given i was also being told by my grandmother that i needed to learn how to eat and try different foods. even at such a young age i was already suffering the curse of the sensitive and the large at heart...depression. as the baggage of family, friends, death and life began to pile on to my heart they also began to pile onto my body. food became an outlet  for all of those unexpressed things and means to control something in the midst of chaos. then came high school and a year and a half of an eating disorder...the back and forth of starving and binging...my subtle cry for help. it was like smoking in some sense a test to see if i would be noticed, a way to do what was forbidden, and something i knew was bad for me and there for i would do.

on and off the cycles went back and forth. i carried the weight of my shattered family, the need to fill my mother's space, and my own emotional chaos.  like a "cutter" i violated my body time and time again. taking on the pain of others or the pain caused by others as mine to own and mine to fix. i discovered there was a sickening pleasure in doing things that hurt me...like breathing in on a cigarette feeling the smoke filling my lungs and the tightness and hacking cough that comes after or digging my nails into my palms willing myself to wait until i drew blood or having shot after shot of liquor. when i was at the brink of pain and suicidal i would sit there pushing myself with contempt and hatred to keep going take more drink more....exctera.

this year has marked the first time in my life where i have been able to accept and come to terms with my body. most of my life has been fighting or using it to hide and keep people at a distance. it's like a maddening rush of freedom and it makes me want to run wild with the headiness of it all.

what blows my mind most often about this change is the little things that change, like being comfortable being naked, or how i walk and feel in my body.  these are not earth shattering events except that they are for me. as my perception of myself changes so does my outlook towards others and the world. i have more grace for others and i realize that i am valued and should be treated as such in a way i didn't see before.
Posted by jessi knippel at 6:48 PM