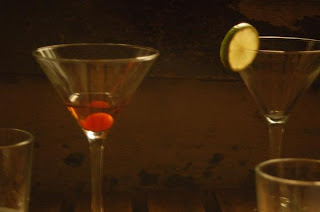 being at a bar on a friday or saturday night is like watching an an auction from the sidelines....especially if you are going out in hollywood. in the sea of people 80% are there to get seen, hook up or find a shallow form of connection in the hope that it will become something real. across internet site and bar stools and church pews we all are searching for our mystical other half or at least a warm body for the night. a search for that other person who despite all the work one can finally say "yes" i love you more than i hate the way you talk during sex, the way you eat your apple, the way you write your checks or what-have-you. at the core we are all made for relationship for that deep connection with another person. it's rooted in our stories and myths and religions. a major part of being human it the desire to be in intimate relationship with another person....to share life together with someone.

tonight at the "beauty bar" which is set up like a salon and offers manicure and martini specials...the majority of the crowd were men. which was interesting because i really don't think they were there for a manicure! but what i found really interesting was watching all of the people coming in...there were very few couples...most of the people there at this bar were there to meet someone. yet no one in the whole three hours i was there nursing my dirty vodka martini and chatting with my friend wendy over the dj's eights mix did that i could tell "meet someone". it was like being back in seattle where everyone is single but very few people approach another person for a date. i watched as men looked around and tried to interact with the various groups of single women but didn't. this i think is honestly the first night i have been out to a bar in los angeles where i haven't seen anyone hooking up or connecting. it was very odd.

the whole energy too was that of unmet expectations and desires...most of the patrons were dressed up to impress, many of the girls wearing four in heels that i kept fearing they would fall and break something in and tight and super revealing outfits that would be more suited for las vegas than los angeles. yet even with all this plumage there was a serious lack of connection happening.

after leaving and passing several other bars, with lines of people waiting to get in, i thought a lot about what the atmosphere of these kinds of nights are what it is that people are looking for...i also thought about some of the cultural theory work i am reading for my research paper. one of the theorists was talking about part of the freedom of sexuality post 1960's was about the freedom of risk that women take by owning their sexuality. that we are to be aware of the possibility of harm that could come when moving outside the bounds of protection and care of the previous structures that guarded female sexuality. what a risk it is to open one's self up to another person....especially one who you are going on a blind date with or meet somewhere like a bar. you have no context for knowing this person or who they are and yet we willingly trust this dynamic.

it's all very interesting to me. this idea that we have culturally it's most easily expressed in dating rituals but comes in many forms, what i am talking about it the choice of instants in the hope of substance. we do it with food too...take popcorn i know silly but hear me out. i am a purest when it comes to popcorn unlike my roommate i will always choose stove cooked popcorn to microwave given the choice. while microwave takes only two minutes or less to cook and stove popped takes a whopping four to six minutes more the pay off i believe is way better. i think so often these days with the instant accessibility of things we forget that the "for the time being" things often inhibit our ability and desire for the real. like getting a quick snack at a fast food joint can take the place in a really depressing way of my desire for substabtial food. often when driving home from a late class i will grab a quick snack only to get home to a lovely meal and be too full to have it. i feel like bar dating is often like the quick snack at least in most circumstances....i do know one couple who were successful in their bar-met pairing but they also knew each other as friends for over  a year before they got together so it wasn't really the same thing.

lastly let me say i am not passing judgement on this action just asking or thinking critically about it...lord knows that more often than not my dating stories are the comic relief that i offer up to others about how much worse their experiences could have been. just recently i went on four dates with a man who is most likely still involved with his ex or maybe still wife before the red flags hit me in the face...yeah that's another story for another time.

over all i just find the whole dynamic of need and loss and desire and half filled need interesting and odd especially in light of some of the things i am reading currently working on a paper about God, sexuality and gender.
Posted by jessi knippel at 11:45 PM