here are some of my current favorite listings....top five, desert island, bunker what-have-you listings of books music and movies 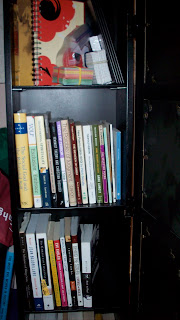 books~
*walking on water by madelenine l'engle- ever since the first time i read this book in college many years ago i try to re-read it at least once a year. i LOVE the way madelenine speaks to faith and art, valueing each in the integrity of themselves not trying to force one to serve the purposes of the other.

*2666 by roberto bolano~ my friend paul recommended this book after we had read david foster wallace's infinite jest over the summer for a reading group and i had attempted and gotten half way through thomas pychon's "gravity's rainbow". the book is three interlacing stories that all connect to a fictionalized version of juarez, mexico.

*animal dreams by barbara kingsolver~ i tried several years ago to read the posionwood bible and yet couldn't get through it at all. yet when i picked up this book two summers ago i was floored and enticed by the story. then i was delighted to find that it was on our book list last spring for my theology and lit class.

girl in landscape by jonathan lethem- i found lethem through the musician deb talan of the weepies....she had written a song based on his book "motherless in brooklyn" when i tried to get it from the seattle public library it was check out but this one wasn't. based in part on the story of the john wayne film "the searchers" this book blew my mind and i was caught. i really love everything i have read by this man with the exception of "as she climbed across the table". "gun, with occational music" is also a great read.

gonzo-which is stories and letters and people writing about their experiences with the late hunter thompson. while i don't agree with the way he died i really enjoy the man's writing and perspective on life. i feel like he had and integrity and hope which many other writers in this genre lacked.


*scott pilgrum vs the world~ it's funny, the cast is great and it's based on a graphic novel!

*shopgirl~ steve martin is incredible all around. i love the book and the film....enough said.

* blue valentine~ the utter heart ache of two people who cannot seem to connect after years together is horrific and beautifully constructed.

*monsoon wedding/rachel getting married~ the vibrance of india/the northeast, realistic family dynamics and trying to sort through them, the chaos of weddings, the beauty of people coming together, and music and celebration

*the whole BRMC catalogue~ i can't get enough of this band, live studio whatever...i'm sold. their version of the true blood theme song is incredible...and live they are hands down the sexiest and most powerful band.

* the black ryder buy the ticket take the ride~ ever since i heard this album i have been mesmerized by the music of aimee nash and scott von ryper...i have gotten to see them play live a few times over the last eight months and am always in awe. in addition i got to help my friend iAN interview scott for the BRMC website and truly enjoyed the chance to chat about art and music with scott. support good music by the album. lastly even if you are totally antiwhistling listen to and watch the video for "sweet come down" scott has the sexiest whistle i have ever heard in my life!

*ryan adams~ heartbreaker and love is hell parts 1 & 2~ ryan adams is incredible...with the band whiskeytown he created beautiful music and as a solo artists he has continued to do so. both of these albums are filled with heart break and love. and his cover of oasis's wonderwall is my absolute favorite version of the song.

*the head and the heart~ this seattle band is wonderful and listening to this album reminds me so much of what i miss about that area. they are uniquely northwest sounding and lovely.

*tv on the radio~ dear science~ can't sing the praise of this band enough. there is so much diversity going on in their music.

so this is the briefest of lists more to come, i think, soon.

Posted by jessi knippel at 1:24 AM