pin-ups, playboy bunnies, and what is sexy? 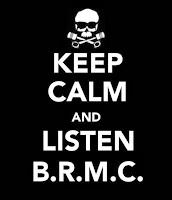 A few weeks ago I once again found myself at a special event that featured BRMC...gee I wonder how that happened.

What was most interesting to me was that Playboy was one of the event sponsors (it was put on by Playboy and Harley Davidson, for current military personnel...which according to Peter Hayes was the main reason BRMC was playing). Now one would think that being at a Playboy event would lead to very major shattering of any "normal" woman's self confidence or at least add some cracks. Especially for someone like me who has struggled a lot to see beauty in herself. I mean really like the porn (and basically any media industry) who can compete with those who have been CONSTRUCTed to fit an impossible ideal? 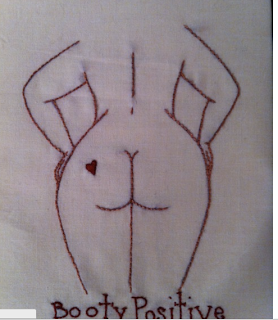 I mean very rarely are larger women seen as objects of desire or affection. I to date have only seen one film that showcased a sex scene with a woman over size ten, and it was an indie film! So going into the event I was assuming that I would just bliss out to one of my favorite bands and ignore the women who were dripping sex appeal. Because being the person I am when it comes to competition, especially in attracting men, I bow out early and fast.

So with all of this swirling in my mind I entered what is one of the hippest clubs in San Diego...only to get hit on with in about ten minutes by one of the guys who worked for Harley! Instead of feeling threatened by the Playboy girls, I felt bad for them because so many of them seemed to be less comfortable in their skin that I was. While I have a whole bag of issues when it comes to myself image and relationships, when I let go...I do let go. Because I didn't need the attention of anyone there I was able to just groove to the preshow music and of course BRMC. Actually truth be told I was getting rather ticked off at the guy who kept hitting on me during the concert...I mean really when I say this is one of my favorite bands please don't talk to me during their set!!!!

Over all besides the always wonderful experience of this band live, I walked away from that night feeling sexy, confidant, and wanting to hear the stories of the women there who worked for Playboy.

Since going to that show I have been rolling around the idea in my mind of what exactly is sexy and how do I want to express my sexuality? How do I continue becoming more comfortable in my own skin and being. As I've pondered this I find that I keep remembering moments and people who encouraged me in this adventure. I also have been looking at what I see as beautiful and sexy images...what looks or elements inspire me.

There seem to be so many; 50's pin up styles, burlesque, writing on the body and tattooing (the pillowbook is a film that greatly effected my view of the body as a canvas), the film Secretary, vivid colors and lush saturation of color....and the list goes on. I find that beauty and sexuality are more about confidence than anything else. The women (and men) I know who have the most powerful aura in any setting, are those with utter confidence in themselves or at least a deeply rooted sense of self. Many people can take on a "role" for a while but it is a powerful and world shifting stance to live fully into ones self. In the end I think that is what I find most appealing...confidence rooted in a solid sense of self...and that is what I am slowly in snail time developing.
Posted by jessi knippel at 10:55 PM