Reflections about sitting in a dark room with a flickering screen...

Last semester and this I have been able to have the chance to write about transformational moments while watching films...

This first one is from last semester and the second just posted today. 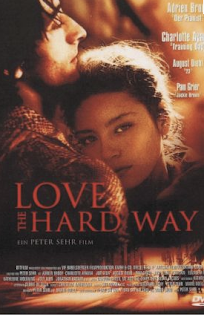 Film and art have, ever since I could remember, been predominate vehicles for God’s revelation of Truth in my life. Maybe this has a connection with growing up in a household of artists.  Whatever the reason I find that I have had so many profound experiences with film that choosing one specific one to write about is a hard task. In light of that I have chosen instead to write about a film that suck with me for a long time after I saw it.
The 2001 independent film “Love the Hard Way” is a film about relationships and the costs of love. It centers on the relationship between Jack a conman and budding pulp novelist and Claire a graduate student at Columbia. Jack has his criminal life, which is the basis for his artistic life and in neither does he expect to be affected by the unexpected. When Jack meets Claire he only sees her another conquest to be had. Yet through their relationship Claire sees deeper past Jack’s walls of indifference and aloofness, to the tender spots of a man who is in need of affection. Not wanting to be seen or tied down Jack pushes Claire away breaking off their relationship and trying to shatter her image of their relationship.  Claire in turn, to seek him back, journeys deeper and deeper into Jack’s shadow world of crime to get his attention and call him back to love.  It is only when Jack is faced with the fact that Claire’s love for his has lead her to destruction that he allows himself to be affected and moved.
After watching this film for the first time I could not get it out of my head. For days and weeks later I mulled over the story and the characters’ choices in the film. I kept coming back, trying to understand the two central characters. What was it about Jack that kept him so isolated from love? How could Claire allow herself to fall so deeply into “the dark side of the moon” as it was described in the film for this man who seemed unworthy? There is and was something about this story that hits at the core of my understanding of relationships.  While the way in which Claire goes about seeking a response and action from Jack is incredibly destructive, her call to love and willingness to risk struck my heart. For me the film stood as a reminder of fact that, the call to love costs something sometimes entering into dark and dangerous spaces. While Claire is not a “Christ-figure” in the film there is something about her in the dark spaces of Jack’s world that imitated Christ on the cross for me. Jack sees Claire as innocent and outside his dark world, her presence there shifts his view of this world changes how he sees it. Christ’s presence in the world and especially on the cross in all the horrificness acts similarly to Claire’s presence in Jack’s world, it is that jarring reality of the way things are. I was also greatly impacted by Claire’s willingness to risk the loss of herself because of her love for Jack; it is this willingness that acts as a catalyst to move Jack outside of himself. In the end this love the hard way is that which almost destroys both of the characters yet the means to their salvation. It shocks them out of their perspective paths and leads them to a deeper understanding of themselves and their journey.  For me as a story watcher and teller the conflicts of love and relationship are something I am inherently drawn to. Since my understanding of God is centered in relationality as a key aspect in the Godhead imaged through the imago dei, I find that I am drawn to art that asks questions about the fundamentals of relationships. Love the Hard Way does this, it asks questions about love and cost? How much does one risk for a lover who has abandoned you? What does it take to move someone to change his or her perspective? 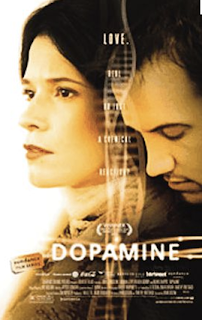 Dopamine-
Many Sundances ago (2003) a film premièred called “Dopamine” it was the story of two people (Rand and Sarah) meeting and connecting and trying to make things work. “Dopamine” is also about the question of whether or not love is love or just a chemical reaction. It was one of the first films I ever got off Netflix, in part because of Sabrina Lloyd, who I had loved in “Sports Night” played Sarah. As soon as it was over I got online and ordered both the film and it’s soundtrack.  From the opening scene I was mesmerized by how beautiful and well made this independent film was.
How often when coming together in a relationship do the two parties approach life with very different lenses in which to see the world. Even when supposedly sharing the same basis, say faith, the way that basis of understanding plays out can be so extremely different. Rand is a man who, because of past experiences, doesn’t believe in love. Sarah on the other hand vitally holds to the view that love is necessary and transformational. Through their mutual attraction and an unexpected encounter these two people find deep connection with each other. The push-pull between Rand and Sarah as they negotiate drastically different understandings of love (and faith) and in turn their relationship was both beautiful and so natural. I found the portrayal of this relationship so engaging that I kept going back to it again and again. In the context of the film, relationship is that which inspires one on a very basic level to rise up. That is and was a powerful message to my ravaged heart. In the two characters all my internal battles about relationships, love, and faith seemed to meld and find balance. For me this movie was rest for my seemingly never-ending internal war. It also inspired my creativity. In several scenes Sarah is seen painting. In watching this film, specifically those scenes I was inspired to paint, something I had not done for several years. Painting since has becomes a means of emotional expression and outlet, which I might not have re-encountered had it not been for this film. In addition “Dopamine” was also one of the first films I saw which inspired a small voice to say “I can do that, I’d like to do that” in regard to film making and creating movies.  Still almost ten years later this is one of my favorite movies…Rand and Sarah still have many things to say to me about life and I am even more inspired by the way in which this story is told.