This is a paper I wrote several years ago and came across today.....it's an image of my emerging engagement with film. 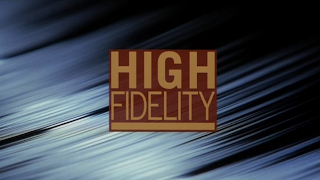 Rob: I'm tired of the fantasy, because it doesn't really exist. And there are never really any surprises, and it never really...
Laura: Delivers?
Rob: Delivers. And I'm tired of it. And I'm tired of everything else for that matter. But I don't ever seem to get tired of you, so...(Frears, 2000)
Marriage has to be based on something more than a fantasy it takes work and commitment. I think this is the whole premise of the film High Fidelity, based on the book of the same name by Nick Hornby. High Fidelity speaks about marriage, the essence of marriage the coming together of two people.  Rob Gordon is a thirty something man who is finally learning how to truly be in a committed relationship. It only takes him losing his great girlfriend, encountering ex-girlfriends, winning his girlfriend back and then doing something that could cost him everything he has just gotten back and learned. At this point Rob realized that he has spent his life chasing after fantasies, instead of committing to Laura his girlfriend.  He realizes that he has something good someone worth making a commitment to. Commitment and fantasy are two elements that cannot live together in a marriage.  To be committed is to give up fantasy and live in reality of the day to day with one person.
The focus of the film is Rob’s journey towards commitment. First we see that Rob hasn’t left behind any of his past relationships. He is still clinging to the illusion of what he remembers them to be. “Some people never got over Vietnam or the night their band opened for Nirvana. I guess I never got over Charlie.”(Frears, 2000) Charlie along with three other exes’ have been fantasies where Rob can live out the past as a way to not live in the present. He is more tied to these past relationships than to his real relationship with Laura. When she leaves him he decides, with a bit of help from Bruce Springsteen, to revisit the past as a way to make him feel better. So Rob goes to back to his “top five break-ups” to find out why he is doomed to be left. What he finds is that he has been living in the illusion of what these relationships were. Charlie Ncklson being the most devastating of those relationships. This woman, he once thought to be so deep, wise, and above him, Rob now finds to be arrogant, self-centered, and lacking a sense of humor.  This relationship with Charlie is where Rob stopped growing, he stagnated his life.  In facing the reality of the fantasy he is able to look forward and outward. When he is faced with Laura’s need, after the death of her father, Rob is actually able to see her. In the face of her sorrow he sees how selfish and self-centered he has been in their relationship. “I can see now I never really committed to Laura. I always had one foot out the door, and that prevented me from doing a lot of things, like thinking about my future and... I guess it made more sense to commit to nothing, keep my options open. And that's suicide. By tiny, tiny increments.”(Frears, 2000)  Laura and Rob come back together and all is well, for a while. Rob is thinking about Laura and trying to commit to her, yet he hasn’t given up all fantasy. He is still tempted by the fantasy of a new person, having given up the fantasy of past relationships. This is when the reality of relationship (and marriage) enters into his lesson. After finding himself happy with Laura and yet tempted by another woman Rob realizes the fundamental problem with fantasy that it doesn’t deliver in the way it promises to. Through encountering this truth he is faced with the reality, that while his relationship with Laura is hard and messy, he never tires of her. This is the woman he has chosen to create a life with and commit to, while that may not look as good as the fantasies he creates it is what he most needs and wants.
I love the picture this film presents of relationships, one that I think really emphasizes what it means to be committed and married to another. There is such a beauty in watching this man discover what true intimacy and relationship is. Laura and Rob know each other’s heart and in the end are able to call each other up to something greater. When Laura leaves the relationship at the beginning of the film she leaves Rob for another man. Rob pursues her in spite of this, knowing that this other man isn’t for Laura. In turn Laura knows Rob’s heart when it comes to his passions and desires for a future. She lovingly calls him to become the man that he has been made. This film not only shows the importance of leaving other relationships and commitments behind when entering into marriage but also the beauty of two people coming together.
Posted by jessi knippel at 11:11 AM